Usually content creators on Uplive take years to grow their fame, but Mackenzie Sol was destined to be famous and his talents have lead to skyrocket success both on and off Uplive. Having competed in the X-Factor at just 4 years old, Mackenzie’s vocal talent has been praised by the likes of Simon Cowell, and his acting prowess has been recognized by Royal Ballet School, the world’s top performing arts school.
The 18 year-old sensation has performed with other famous artists such as Jennifer Hudson, Josh Groban, Kenneth Babyface Edmonds and more. Mackenzie is quickly starting to gain recognition as an up and coming artist not just in the United States, but around the world.

In 2016, Mackenzie released his music video “My Name” which quickly went viral with over 6 million organic YouTube views and 340,000 Spotify streams. Mackenzie currently resides in Los Angeles and is seeking opportunities to take his burgeoning music career to the next level.

Uplive has become a part of Mackenzie’s effort to further his career goals. Through the app the young performer’s global reach expands to over 100 million users across the United States, the Middle East, India,Taiwan, and more. These fans interact with Mackenzie during livestreams and support his career with virtual gifts to show their love and support. In addition to fans, Uplive has connected Mackenzie to a massive network of content creators who are all willing to contribute to each other’s growth and development. On Uplive Mackenzie is a part of a global family of users who consistently push each other to reach new heights.

Uplive is proud to have young and successful content creators such as Mackenzie Sol within its platform, and is always willing to support them in reaching new audiences, perfecting their craft, and connecting with users the world over.

Catch Makenzie’s recent single “Taken”, a result of collaboration with Grammy-winning singer Diane Warren. The song has over 2 million views and displays Mackenzies prodigious singing and dancing talents. Check out the video here.

Mackenzie and more talents like him are using Uplive to showcase their love and passion for music, dance, comedy and more. With over 100 million users worldwide, Uplive is the perfect tool for young talents and content creators. The leading live streaming app has been taking over one market after another due to its leading technology and its mission to support content creators. 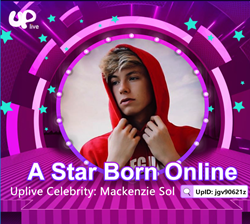 This is article is a part of the Uplive Celebrity series. Each month Uplive selects an outstanding streamer to highlight and share their personal stories about their rise to prominence. Read uplifting tales of challenges overcome, and dreams realized all through the power of mobile live streaming. Think your story deserves to be featured? Email uplive.usa@gmail.com with your UpID and narrative for the chance to be the next Uplive Celebrity.